Posted at 12:00 PM in US Immigration News and Articles by admin

You may be able to request Expanded DACA.

On Novemberr 20, 2014, the President announced that, within 90 days, US-CIS bsould extend the Deferred Action for Childhood Arrivals program (DACA). This means people may deferred action under DACA pmgram is expanded. If you received deferred action, you may be able to stay in the United States temporarily without fear of deportation, for a three year period. In addition, you will be considered for employment authorization, which would allow you to work legally in the United States, for a three-year-period.

WHO CAN REQUEST DACA UNDER THE EXPANDED PROGRAM? 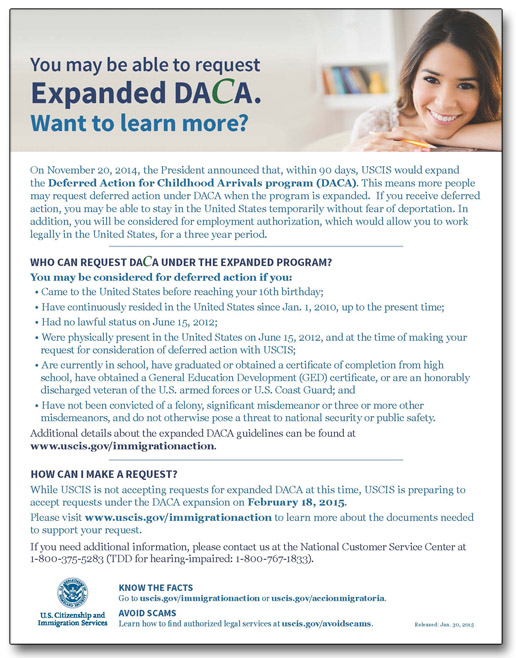 You may be considered for deferred action if you:

Additional details about the expanded DACA guidelines can be found at https://www.uscis.gov/immigrationaction.

How can I make a request?

While USCIS is not accepting requests for expanded DACA at this time, USCIS is preparing to accept requests under the DACA expansion on February 18,2015.

Please visit https://www.uscis.gov/immigrationaction to learn more about the documents needed to support your request.